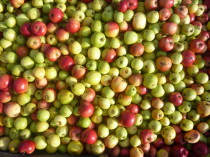 We have a very small orchard planted with traditional cider apple varieties, including Dabinett, Michelin, Tremletts Bitter, Kingston Black, Allington Pippin and Lord Derby from which we make and bottle our own cider on site.

Our vintage ciders have been named after two of the most significant events in English history which took place locally. Our dry cider is called Roundhead after the battle of Naseby in 1645 the decisive battle of the English Cival War and our medium cider is called King Richard III who was born in Northamptonshire and killed at the battle of Bosworth in Leicestershire in 1485 bringing to an end the Medieval Plantagenet era and heralding the modern age.

The alcohol content of both ciders is usually around 6%

King Richard III is in stock at £2 per 50cl bottle

Address for correspondence only:

Wine & cider sales are generally by prior appointment. However if you are passing do call in if you see our car.