Stay informed:  We do not tweet or use facebook etc but please call in or phone if you are interested in what we are doing.  Also check our offer on the LoyalFree app.

All's well that ends well. Following a very late spring the summer was excellent leading to the biggest crop since 2006. This was much needed as stocks of still wine are at very low levels.

In October we entered the East Midlands Region Cider and Perry competition in Nottingham organised by CAMRA. We were delighted to receive a Gold Medal and awarded Best Bottled Cider for our Medium Dry Roundhead cider. 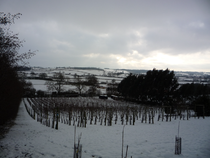 The winter scene - a cold winter is beneficial to reduce acidity and clarify the previous year's wine in the storage tanks. Also to kill any fungal disease or pests in the vineyard. The vines themselves are very hardy and can survive temperatures well below what we experience in this country.

However we do not want frosts in May when the vines have started to re-grow. 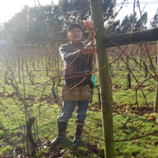 Winter pruning starts in January and carries on until the end of April when the buds break. 95% of the previous year's growth has to be removed to restrict the size of the vine and ensure it's efforts are concentrated on ripening a manageable crop.

It was a good year for us in the Mercian Vineyards Association annual competition with David Bates winning the Best Commercial Winemaker/Grower Trophy for highest average score and also voted by the members as the Personality of the Year. Steeplechase 2010, Bacchus 2013 and Naseby 2013 all won Silver Medals and Farndon Dale 2013 a Bronze Medal.

We were also awarded a Gold Medal at the CAMRA Nottingham Beer and Cider Festival for our Richard III cider. Unfortunately all our cider is now sold until the 2014 crop is bottled in early summer 2015

CLICK ON 'New page' top left corner to carry on

Address for correspondence only:

Wine & cider sales are generally by prior appointment. However if you are passing do call in if you see our car.